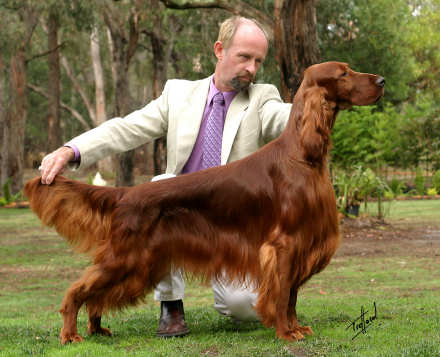 “Foggy dog ”  or “Fogarty ” as he is better known , came to join us at Pendoric when he was just over 18 mths old.

Settling into our bustling lifestyle was a shock initially but he soon came to love being “one of the gang” at the shows & sleeping on our bed now comes quite naturally to him !!

He  achieved so much in the years since Lesley & Pat Heskett (NZ) entrusted him to us. At his 1st shows he was RDC  & Intermediate in Show at our ISC of Vict Specialty (Mrs R Pike UK )  RDC & Opp Intermediate in Show at the ISC of NSW Specialty  to his half sister “Libby” (Mrs P Daverne USA) Top Irish Setter In Australia (DOL pt score) in 2007 and 2009(All Breeds & BOB). And again in 2010 .Top Irish Setter In Australia (BOB).

Top Irish Setter in Victoria & No 3 Irish Setter Nationally in 2008. He has now won over 49  All Breeds Best In  Group &  Runner Ups. Multiple Best in Shows (6) & 7 R/Up In Show All Breeds &  with over 105 Best Of Breeds reinforcing his universal appeal . He attained his Australian Grand Champion title very quickly & was DCC winner & Runner Up in Show at the ISC of NSW Specialty in April of 2009 & Best In Show in 2010.  He was also RDC & RUBOB at Sydney Royal 2009. Best In Show at the Victorian Gundog Club with a record entry of over 466 exhibits. And in 2010 & 2011 he was DOG OF THE YEAR  in the prestigous ISCV Club awards & BOB winner Nationally (DOL)2010. Again in 2012 he was Best In Show at the ISC of NSW specialty (Mrs J Mugford UK )  In August of 2012 he attained his Supreme title with a BOB & Runner Up In Group award (Mr P Martin “Martinridge” ) He was then shown selectively only appearing @ The Royal Melbourne Show and our yearly ISCV of Victoria Specialty.

We then sent Frozen semen to both the USA & Sweden from the same collection.
Two litters resulted in Sweden with a couple of superb males carrying the “Applegrove ” Prefix & being out of an  Applegrove Dam … Ch Applegrove Look At Me Im Natalie.
Applegrove I am the Dragons Aid (Harley) being a BEST IN GROUP winner & now also siring some lovely litters. Applegrove Floating On Air (Yuri ) is in Russia, Applegrove Foreign Affair (Amor) is in Finland.
Applegrove Mountain Flair (Petter) is in Lapland,Sweden.  All these boys have been doing some serious winning when & where it counts. And not to forget Applegrove Fairielle (Ellen ) also with lena Argard in Sweden.
Previously “Melvin” had sired a  litter also at “Applegrove” (Lena Argard ) to produce Applegrove Béchamel (DENNY) who became the Top winning Irish Setter in Russia and a two times World Winner ,(2014  Helsinki & in Amsterdam Veteran Winner 2018. WW.
Applegrove Melbourne (Jason ) in Germany. ,Applegrove Thymely Timmy (Tim) Applegrove Karma Chameleon, {Karma ) with lena Argard in Sweden. 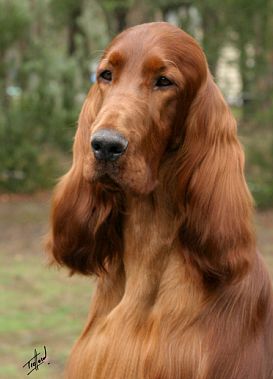 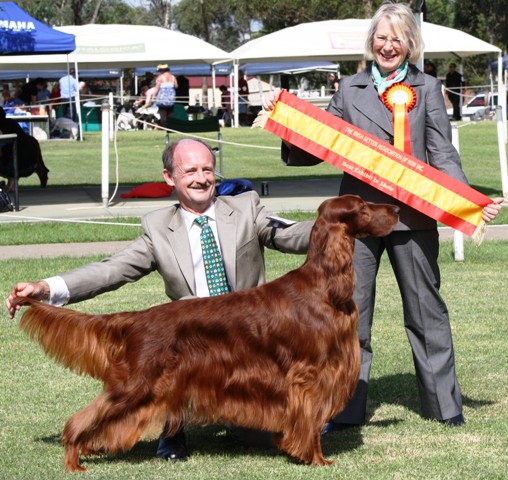 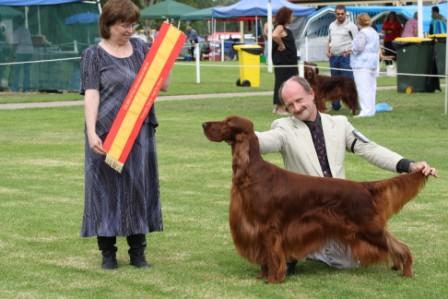 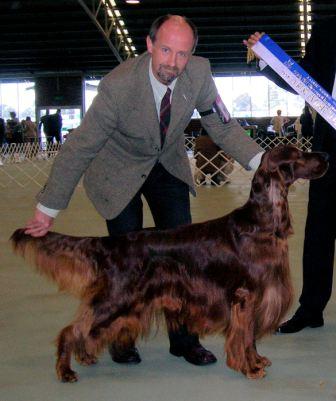 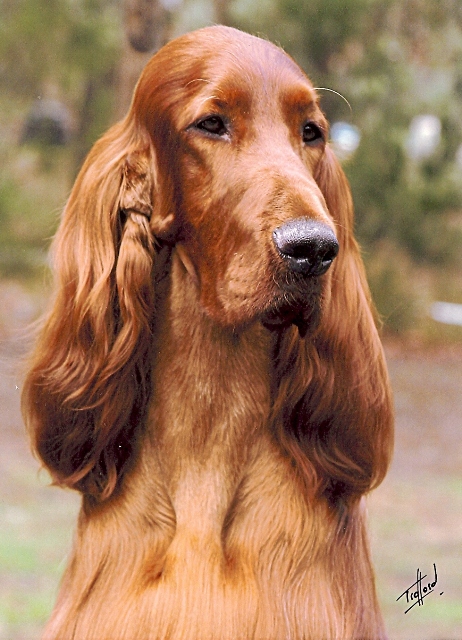 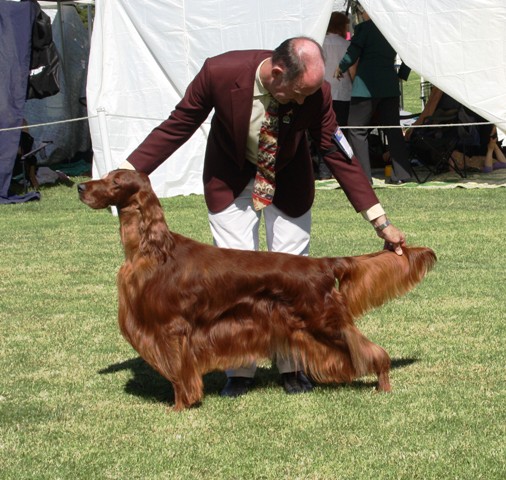 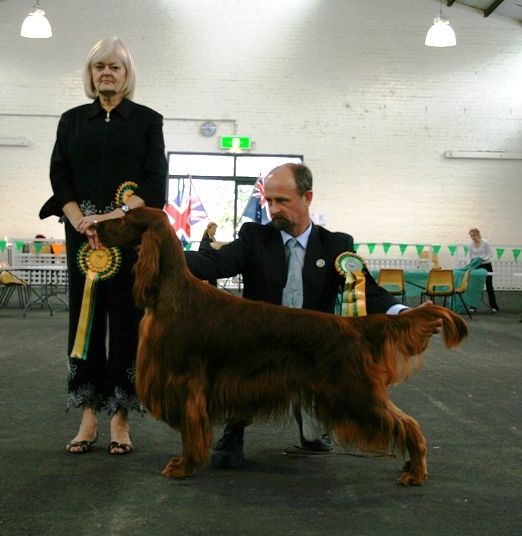 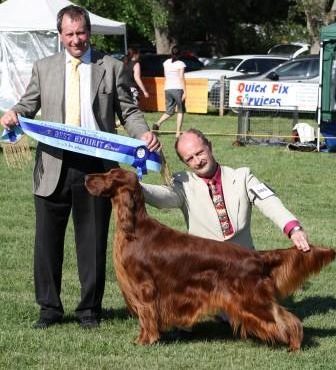 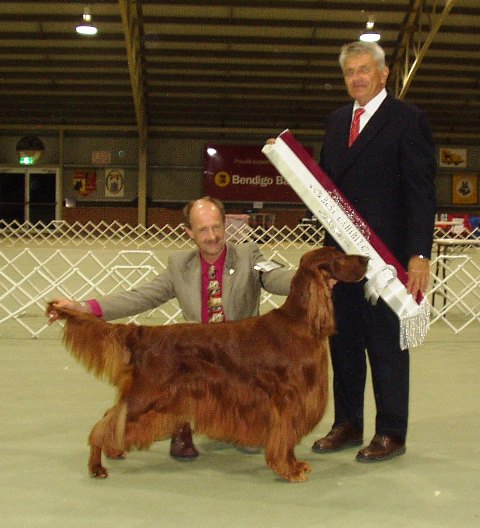 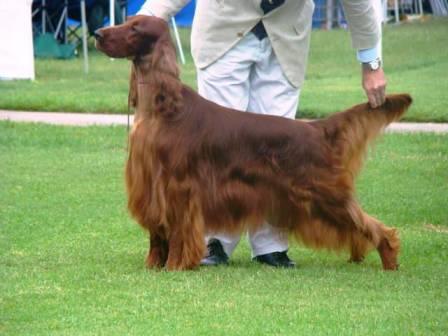 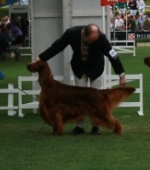 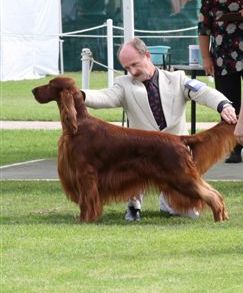